A boundary seems like a simple concept. Unfortunately, establishing boundaries is a complicated matter, especially in the ocean. The information provided helps to minimize the confusion surrounding marine boundaries and explain why planners should care. Planners can use marine boundary data sets for things like determining what laws apply where and which agencies have jurisdiction in a given area.

Maritime Zones and Boundaries Under International Law: The limits of maritime zones recognized under international law are officially depicted on National Oceanic and Atmospheric Administration (NOAA) nautical charts. Several limits are also (unofficially) displayed in MarineCadastre.gov, which is a partnership effort between NOAA and the Bureau of Ocean Energy Management (BOEM). NOAA, with the consensus of the interagency U.S. Baseline Committee, develops the limits of maritime zones using standards and concepts consistent with international and U.S. law, including internal waters, the territorial sea, the contiguous zone, and the exclusive economic zone. These maritime zones are measured from the baseline, determined in accordance with customary international law as reflected in the 1982 Law of the Sea Convention. Where the territorial seas, exclusive economic zones, or continental shelves of sovereign states with opposite or adjacent coasts overlap, the convention provides rules for the delimitation of those zones. The delimitation of the respective limits of these maritime zones between coastal nations may be established through international maritime boundary agreements entered into by those nations. See a list of U.S. maritime boundary agreements.

Under U.S. Federal and State Law: The Submerged Lands Act boundary (also known as the state seaward boundary or fed-state boundary) defines the seaward limit of a state’s submerged lands and the landward boundary of federally managed outer continental shelf lands. The Submerged Lands Act of 1953 grants most coastal states rights out to 3 nautical miles (9 nautical miles for Texas, the Gulf coast of Florida, and Puerto Rico). Submerged Lands Act boundaries between the states and the U.S. are not fixed unless done so by a deliberate action of the U.S. Supreme Court (i.e., by a decree “fixing” the boundary by coordinates). The same standards used to determine the limits of maritime zones are also used by BOEM in the development of the inner limits of the Outer Continental Shelf Lands Act. The Outer Continental Shelf Lands Act (OCSLA) of 1953 codified the Truman Proclamation of 1945, defining the outer continental shelf as all submerged lands lying seaward of state coastal waters that are under U.S. jurisdiction. Under OCSLA, the secretary of the interior is responsible for the administration of mineral and other energy- or marine-related developments on the outer continental shelf. Section 8(g) of OCSLA establishes the revenue-sharing boundary, which provides for eligible states to claim a percentage of the share of oil or gas revenues when a federal lease is within three miles of the Submerged Lands Act boundary (see below for additional information about the ’8(g) zone’). Section 8(p) governs revenue sharing for wind energy, but uses the same boundary as section 8(g). 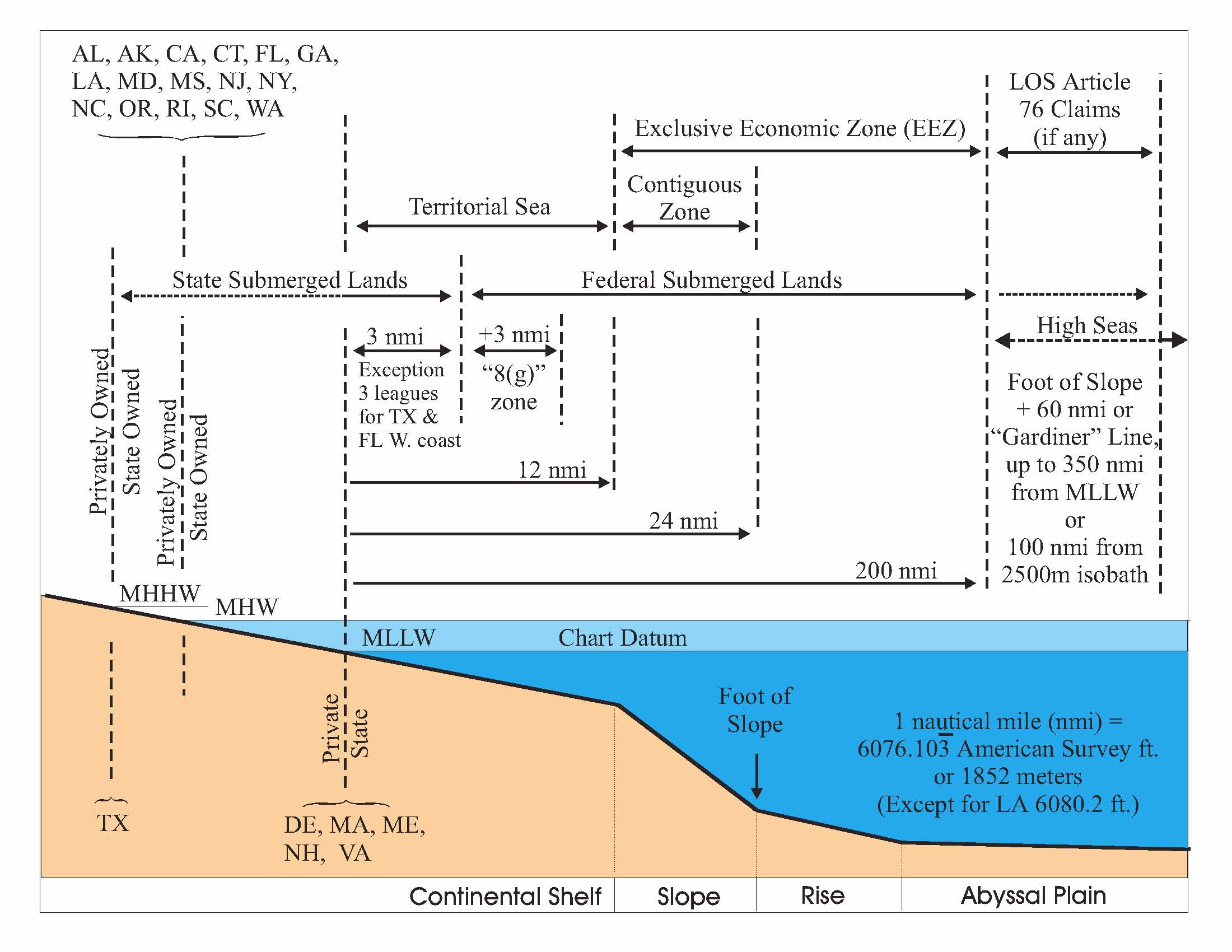 So why should ocean energy planners pay attention to maritime zones and boundaries?

Application to Locating Renewable Energy Sites: When determining potential lease block activities within U.S. waters, it is wise to determine whether federal or state governments have authority or control over resource development in that area. For this reason, the “Jurisdictions and Boundaries” data layers are essential for all offshore decisions. Additionally, it is helpful to know what other authorities and legal requirements pertain to particular locations. By clicking on the Identify button in the Marine Cadastre National Viewer and then clicking on an area of interest, you can see what federal laws may apply in that location. This functionality within the viewer is made possible by the Federal Georegulations Identification layer, which is not visible by default. To visualize the boundaries of these federal georegulations, search for them in the search bar and select them individually. Often, the boundaries of these laws are based on the extent of the limits, boundaries, and zones described on this page.

>Application to Revenue Sharing: The revenue-sharing boundary, also referred to as the Limit of the ’8(g) zone,’ extends 3 nautical miles beyond the Submerged Lands Act boundary, or the state seaward boundary. The federal government collects rents and revenues from energy producers as part of their lease agreement. Revenues generated from resources such as oil and gas within the ’8(g) zone’ area are shared between the federal government and the coastal state. Any portion of the revenue-sharing boundary that is based on a fixed Submerged Lands Act boundary is by default also fixed. The following revenue-sharing rules apply to renewable energy leases and are, therefore, important to consider before planning an offshore wind energy project.

Quick Caveats. The data used to compile many jurisdictional boundaries represented within MarineCadastre.gov have been collected from other sources and may not be up to date or may not represent the official legal position of the limit or boundary. The limits of maritime zones and boundary data sets and map services in MarineCadastre.gov include data about the Submerged Lands Act/OCSLA boundary and revenue-sharing boundary from BOEM, as well as the 12 nautical mile territorial sea, 24 nautical mile contiguous zone, and 200 nautical mile exclusive economic zone from NOAA’s Office of Coast Survey. Agencies offer more official information about the appropriate use of their datasets on their websites. In addition, important information can be found in the metadata for each individual jurisdictional data layer. However, the agency with the authority and responsibility for developing the limit of the zone or boundary should be consulted to confirm that it is consistent with the current legal position of that agency. It is important to understand that none of the federal statute boundaries created for MarineCadastre.gov should be construed as authoritative or legally binding. When investigating georegulatory boundaries near the boundary edges, users should consult the most up-to-date applicable jurisdictional boundaries from all respective authoritative sources. Learn more about marine boundaries and how they are used within MarineCadastre.gov by using this story map.