The Department of Energy is hosting a wave energy contest. The goal of the contest is to design technology that can double the amount of energy harvested from waves while decreasing the cost of wave energy. A record 92 teams entered the contest and the top 20 teams have been announced. The next step in the contest will be for the teams to build a 1/50th scale model of their design. 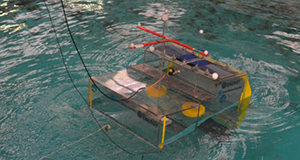