Dominion Resources Inc has planned a series of meetings to attempt to identify cost saving opportunities for two test wind turbines they had planned for off the coast of Virginia Beach. The estimate for the costs of the turbines came in at double what was originally estimated and the project was put on hold. A variety of groups will be invited to the meetings in order to brainstorm ways to reduce costs or offer to help fund parts of it. 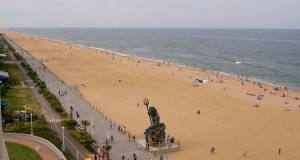