Artificial reefs are a valuable habitat for a variety of fish and coral species. Often, they’re made out of cement structures, built specifically for the purpose. However, sometimes, they’re made out of surprising materials. Over 2,500 New York subway cars were strategically placed to create artificial reefs in the Atlantic Ocean. This article shows the three year progression from discarded car to blooming reef. See the artificial reef data set in the MarineCadastre.gov data registry. 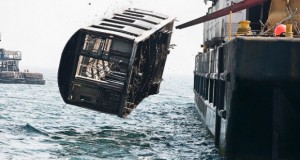