New Turbine Blades on the Way for Testing

A new, 255 ft, offshore wind turbine blade is on the way from the NASA-based facility in the U.S. to the U.K. for testing. This blade is the only modular offshore wind blade in the world and the largest built in the U.S. Blades have thus far been a limiting factor for the cost and performance of offshore wind. The technology used to make this blade would simplify blade transport and allow wind turbines to be designed and built to produce an overall lower cost of energy. 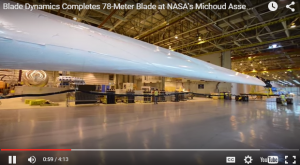