The Department of Energy committed $3.7 million to the Maine Aqua Ventus project, an experimental floating deep-water offshore wind project off the coast of Castine, Maine. The project was originally competing for a $47 million grant but was passed over for projects in New Jersey, Virginia, and Oregon. The department instead awarded Maine $3.7 million in order to continue the work they started for a pilot project off the coast of Monhegan. 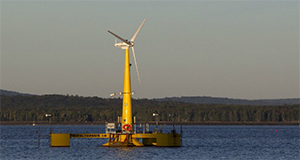