Wind energy off the coast of Cleveland, Ohio took a giant leap with a European energy conglomerate pledging to buy and possibly build an offshore wind farm, eight to ten miles off the coast. The project, developed by the Lake Erie Energy Development Corporation (LEEDCo), always had the goal of attracting outside investment and this serves as the culmination of that goal. But the work doesn’t end there. LEEDCo says the next step is to contract with the city to coordinate a connection to the Cleveland Public Power grid in preparation for the proposed six-turbine pilot project. 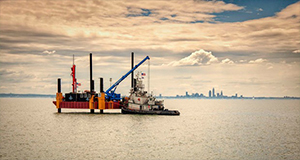