A European energy company is proposing what could be the largest American offshore wind farm 15 miles off the coast of Martha’s Vineyard. The proposal comes less than a year after the proposed Cape Wind project in Nantucket Sound suffered a funding setback. The company, DONG Energy, acquired one of the leases recently auctioned off by the Department of the Interior. The project would build 100 giant turbines generating 1,000 megawatts of electricity which is more than double what Cape Wind was planning. 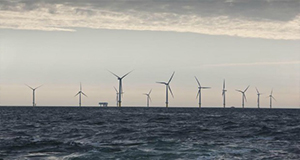