A wind farm in the Great Lakes takes another step forward a and dispatches a team to test soil samples of the earth below the lake. The test hope to determine if an area seven miles northwest of Cleveland is suitable for an offshore wind farm. The project received a grant in 2014 helping the company to get closer to its goal of at least six turbines. LEEDCo is currently pursuing technology similar to that used in Europe where public opposition is minimal and costs are lower. 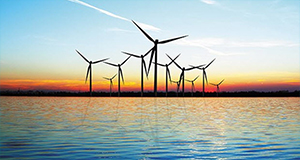