Denmark Broke the World Record for Wind Power in 2015

Congrats are in order to Denmark! Thanks to a windy year and robust capacity for wind energy, the country generated 42% of its total energy needs from wind, despite two major wind farms being offline. This is a 3% rise from 2014 for the country, which was a country-wide record. Two regions supplied more energy than its residents consumed for the equivalent of 60 days. 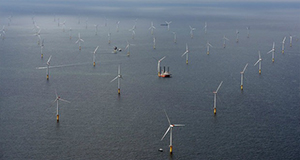